The Difference Between Microblading And Powder Brows 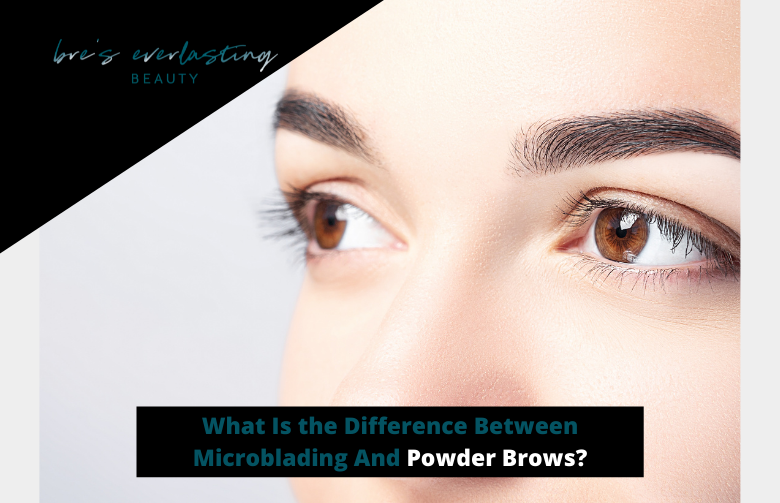 Eyebrows lift the features in the most magnificent ways. Unfortunately, not all of us are born with amazing eyebrows. Those who were, either lost their eyebrows to the 90’s trend, medical conditions, or to time. On the flip side, we are living in the age of microblading and powder eyebrows. This means you can get back the kind of eyebrows you always wanted, and that too for a longer period.

Both these procedures provide an excellent chance for us to get the eyebrows of our dreams. However, when it’s time to take the decision, the confusion between the two creates chaos. That is why we are going to discuss microblading and powdered eyebrows in detail so that you can understand the distinction between the two and make a more informed decision. Here we go:

Before we move on to the procedures, let’s first understand thinning eyebrows. When it happens, it causes lots of confusion and worries. It’s important to understand that there’s always an underlying reason behind shedding eyebrows. As much panic, it might cause, calm down and relax. You can get treated for the underlying issues and if it’s permanent, there are plenty of options that will help you. It happens to a lot of people and could be because of the following reasons:

Let’s begin with microblading. What is microblading and how does it give us the eyebrows we desire? In the simplest of terms, microblading is similar to drawing on your eyebrows, only it is semi-permanent and much more natural in appearance. The word microblading refers to the technique itself. The makeup artist uses a handheld tool with several microneedles on its end. These needles are so fine and thin, that when they insert ink just under the surface of the skin, they end up mimicking the direction and texture of real hair.

As a result, you get eyebrows that are much fuller, neater, and natural-looking. You can choose the color of your ink and as well as any particular style you favor. You can choose microblading for filling in your eyebrows and to give them more dimension.

How is Microblading Done?

Microblading is done using a small handheld device with multiple microneedles at its end. Once the practitioner evaluates you for the procedure, takes your medical history, and assesses your skin type, they’d decide what shape of eyebrows would best suit your face shape. Once it is decided by both you and the practitioner, a rough mark is drawn to get an idea.

Ink color is also chosen based on your skin tone and hair color. When you are ready, a numbing cream is applied to the eyebrows region to make the procedure painless for you. This is an invasive procedure that involves inserting needles successively to get hair-like strokes. Due to that reason, numbing cream is necessary. Some practitioners might even have anesthetists available on site. During the entire procedure, priority is given to sterilizing and sanitizing all surfaces. A trained and certified practitioner would take all the necessary precautions.

Once the preparations are done, ink is inserted under your skin to draw semi-permanent eyebrows. The needles are small and do not penetrate deeply. The procedure might last between half an hour to an hour.  Once you are done, the practitioner would apply a soothing cream and give you aftercare instructions and a second appointment for touch-ups.

What are Powdered Brows?

A handheld device is used to give the eyebrows a powder effect. The practitioners performing the procedure are trained in tasteful; shading and shaping techniques. You can get your powdered eyebrows at Bre’s Everlasting Beauty in Houston, Texas.

How are Powdered Eyebrows Done?

In powdered eyebrows, a handheld device with just one needle is used. However, unlike microblading, it can also be done using a machine. The artist uses this needle to transfer ink under the skin using a particular hand motion. As a result, the eyebrows get a pixelated powder-like effect. This procedure is done repeatedly until the desired look is achieved. The artist’s shading skills play a major role in powdered eyebrows. The artists use their hand motions and shading skills to add density, layers, volume, and dimension, making it look like eyebrows were filled in using a pencil.

You must do your research, and only trust a highly reputed makeup artist with your eyebrows.

How Long Does Microblading Last?

Microblading lasts between 6-24months. It may last for 6-months for some individuals and 24-months for others, all depending on certain factors. Some of the factors that affect the life of microblading include skin type, skincare products, sun exposure, lifestyle, etc.  People who are regular with their annual touch-ups also end up having their microbladed eyebrows for longer.

This service is not recommended for individuals with oily type skin.

How Long Do Powdered Eyebrows Last?

Powdered eyebrows last between 1-3 years, given that you go for a touch-up two months after the procedure. Compared to microblading, it has been noted that powdered eyebrows last longer. They also differ in appearance as such that they appear more filled-in and natural.

If you are not happy with your eyebrows and sick of drawing on eyebrows every time you head out of the house, these amazing procedures are your permanent solution. If you can’t decide which one to choose, we suggest learning about both of them and deciding which one suits you best. You are also welcome to visit Bre’s Everlasting Beauty in Houston, Texas, and get a professional consultation. These two techniques have brought smiles to many faces, you too can be one of them.